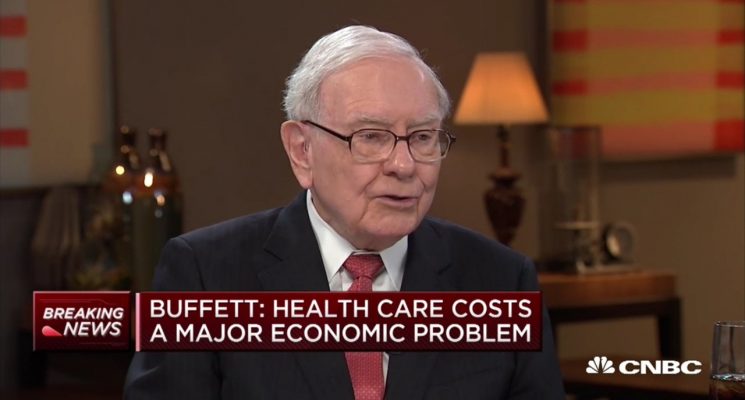 This week in healthcare news: Warren Buffett, CVS, Aetna all talking about lowering costs—who will succeed?

Warren Buffett made some bold statements for CNBC on Monday about Berkshire Hathaway’s healthcare alliance with Amazon and JPMorgan. Buffett stated, “I love the idea of tackling what I regard as the major problem in our economy,” referring to the rapidly increasing proportion Americans are paying for healthcare. He goes on to explain that in 1960, healthcare was 5% of GDP ($170 per person), and this spending has increased to today’s rate of 18% of GDP (over $10,000 per person). For Warren Buffett, this is a competitive disadvantage for America.

Speaking of the goals of Berkshire Hathaway’s alliance with Amazon and JPMorgan he states, “It would be very easy to shave off 3-4% just by negotiating power…we’re looking to do something much bigger than that.” They want to halt healthcare’s increasing share of U.S. GDP by finding a way to deliver better care at a better cost. See the 5-minute interview here: Buffett Shares Details on Healthcare Alliance.

Amid investigations in numerous states of accusations of unfair claim denials and unfriendly patient practices, Aetna has been getting its fair share of negative press in the last month. But on Tuesday, February 27th Aetna’s and CVS’s General Counsels testify before the House Subcommittee on Regulatory Reform, Commercial and Antitrust Law on CVS’s planned acquisition of Aetna. Their goal? To convince this subcommittee that CVS and Aetna’s combined forces are good for healthcare and good for consumers. The testimonies, both published in full on sec.gov, paint a very different picture of Aetna’s future goals from what’s currently volleying through the media.

The testimony of Thomas Sabatino, General Counsel for Aetna, starts by acknowledging that the U.S. healthcare system is inherently flawed; he explains it was formed in the mid-20th century for the benefit of hospitals, employers and insurance companies—not for the benefit of patients. He acknowledges that the U.S. is “the most expensive system in the world,” yet half of American adults are affected by chronic conditions such as diabetes, heart disease and obesity. With rapidly rising health costs and deteriorating health, he says that Aetna recognizes that “the status quo is not sustainable.” But he goes on to assert that now, with increasing consumer demands and rapidly advancing technology, that it’s time to focus on the consumer.   And, as his testimony states, CVS and Aetna are the players that will make that possible. With compelling figures that 70% of Americans live within 3 miles of a CVS store and 5 million people visit a CVS every single day, he lays out how the retail chain is poised to be a community-based health center to address the areas of the World Health Organization’s holistic view of health (“a state of complete physical, mental and social well-being and not merely the absence of disease or infirmity.”) He states, “the key to our strategy is more regular, individualized, and effective engagement with health care consumers not just when they are sick, but as they take steps to maintain and improve health.”

Buffett’s healthcare alliance and CVS’s Aetna acquisition are two completely different strategies to tackle rising healthcare costs, but at the helm of these initiatives is a goal to accomplish the same thing—to provide better care for Americans at a lower cost. It’s an exciting time for healthcare with big changes on the horizon. Stay tuned to see if these initiatives live up to their hype.

BetaXAnalytics is a healthcare data consulting firm that helps employers to cut their healthcare spending through proven strategies to contain costs. For more insights on using data to drive healthcare, pharmacy and wellbeing decisions, follow BetaXAnalytics on Twitter @betaxanalytics, Facebook @bxanalytics and LinkedIn at BetaXAnalytics.

How Much Personal Data Did I Give Up to Take This Facebook Quiz?

Insurtech Vanguards is a community of select startups and technology providers that are bringing new and exciting solutions to the P&C industry.

With just a customer name and address, carriers can understand individual profitability at the very top of the funnel with proven precision.